According to the legend, the origins of Kandyan dance lies in an exorcism ritual known as the Kohomba Kankariya, which was originally performed by Indian shamans who came to the island, from which the locals adopted the dance. It was originally performed by dancers who were identified as a separate caste under the Kandyan Fudel system, they were aligned to the Temple of the Tooth and had a significant role to play in the Dalada Perahera (procession) held each year by the temple. The dance waned in popularity as the support for the dancers from the Kandyan kings ended during the British period. It has now been revived and adapted for the stage, and is Sri Lanka’s primary cultural export.

This exclusive experience takes place in the privacy of your hotel restaurant over dinner, allowing a unique chance to see these dances with no crowds and optimal photo opportunities. Traditional Kandyan dances include the cobra dance, mask dance and the Ginisila (showing power over fire). The entire frenetic and colorful spectacle climaxes with an amazing fire-walking act. The dancers wear elaborate costume including a headdress, their chests only covered by a decorative beaded net. The Kandyan Dance is traditionally performed to percussion only, the most common drum is the ‘Geta Beraya’. To assist the dancer to keep rhythm a small pair of cymbals is also used. The drummers also have lyrics that are sung in tune with the movements of the dancer. 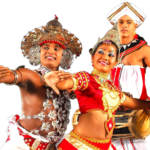